The Scottish word for curlew is whaup. I was in my twenties before I knew that they were the same bird 🙂 Morecambe Bay is a wonderful place to see them and other wading birds. 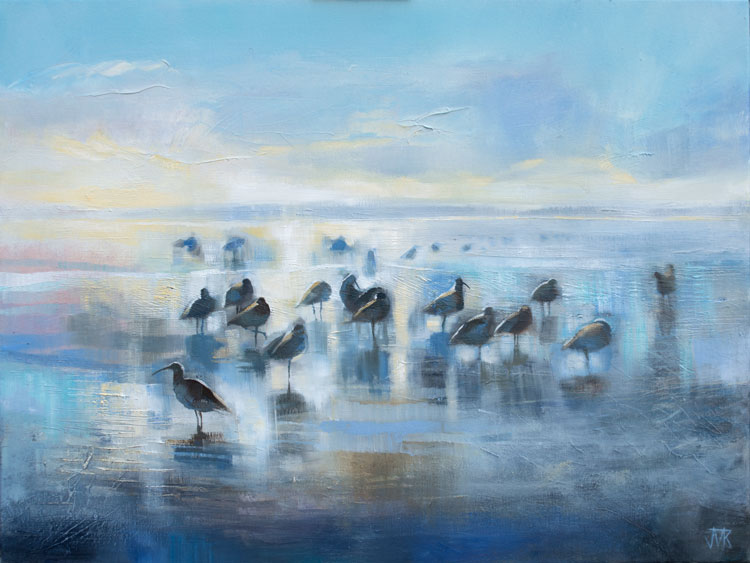 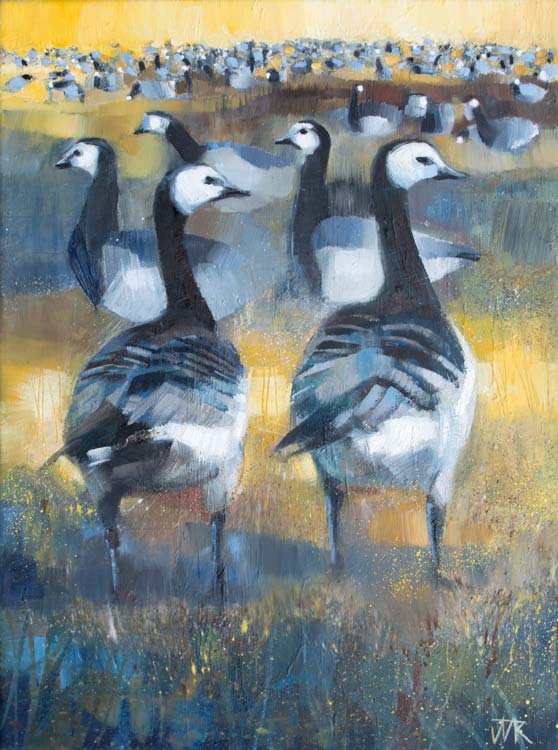 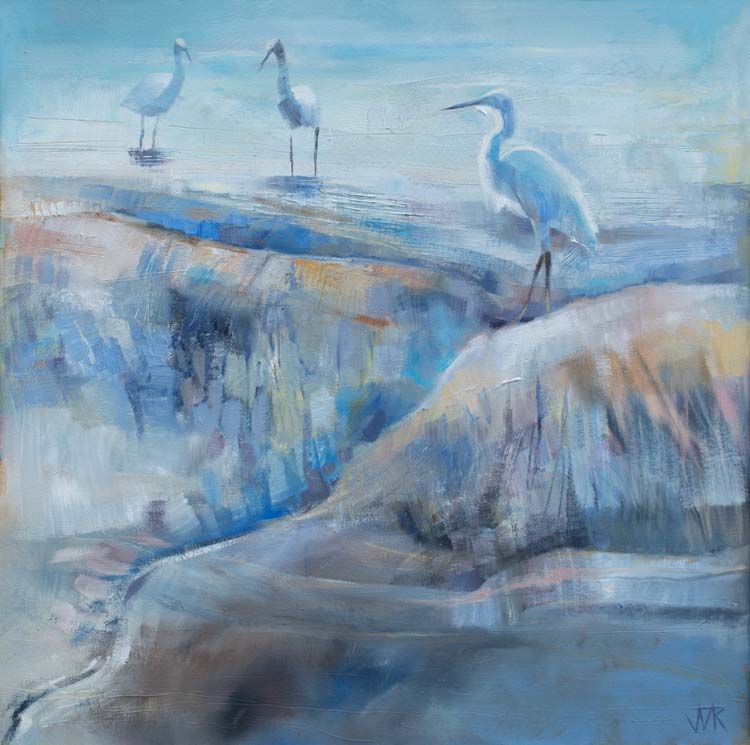 I’ve enjoyed experimenting with wire sculpture since I was 15, when I crafted a trio of chickens out of chicken wire and photographed them amongst our flock of hens, as part of my Higher Art project. Over the last year I’ve started creating things using wire again, as well as dabbling in ceramics and various other things. I think sometimes its just very refreshing to do something in a different way, in this case, I feel like I am drawing in 3D, creating something pleasingly tangible.

I’m working on a couple of herons at the moment, as well as my old favourites the chickens. As always, the legs are the hard bit, but i’m making progress and am quite pleased with how these are coming along.

The herons are designed to be stood in a pond, should you so desire, I will post some pictures asap. 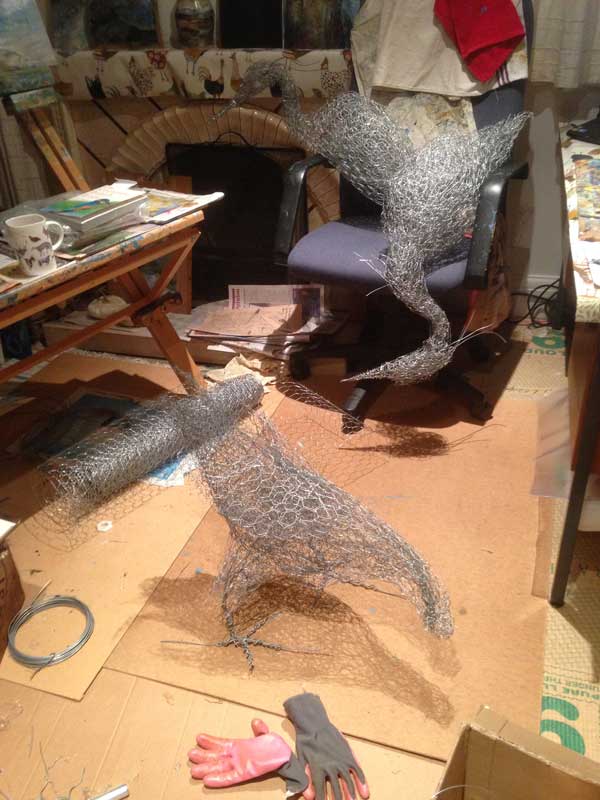 Headless Chicken. My studio has resembled a macabre nativity scene in the last week. 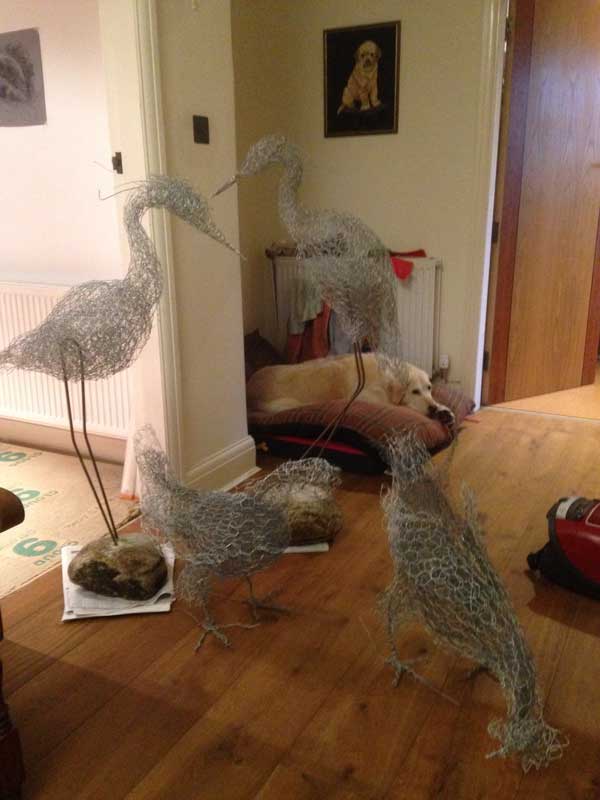 Creatures spilling out of my studio with my unimpressed dog in the background! 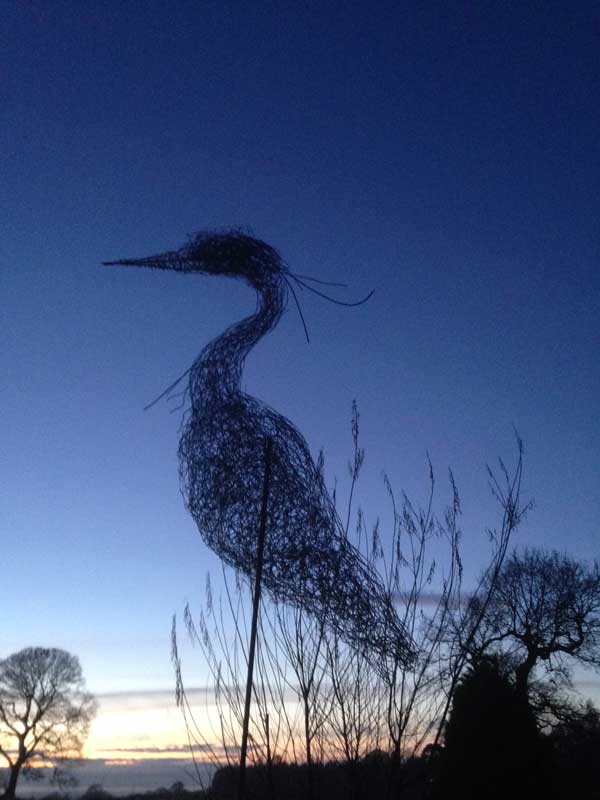 Silhouetted against a beautiful winter sunset -heron in progress. 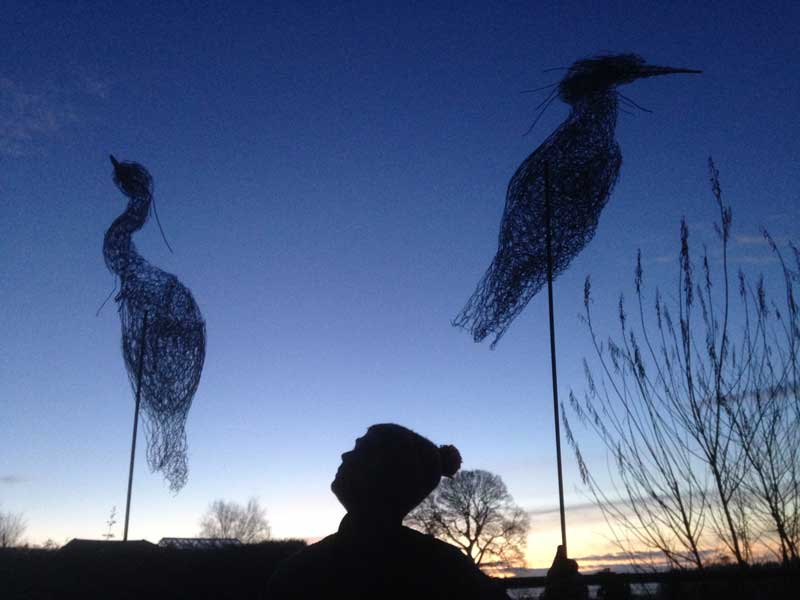 Herons on sticks! No legs yet but I wanted to see how the bodies were looking. 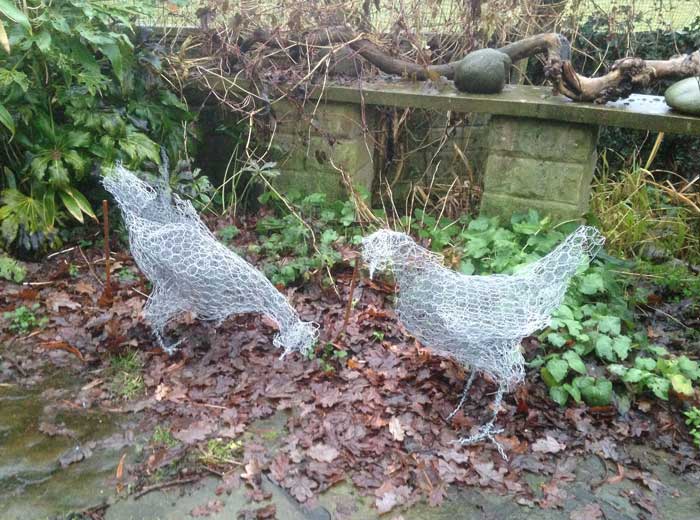 Scartin in the leaves. I love how they develop a character. 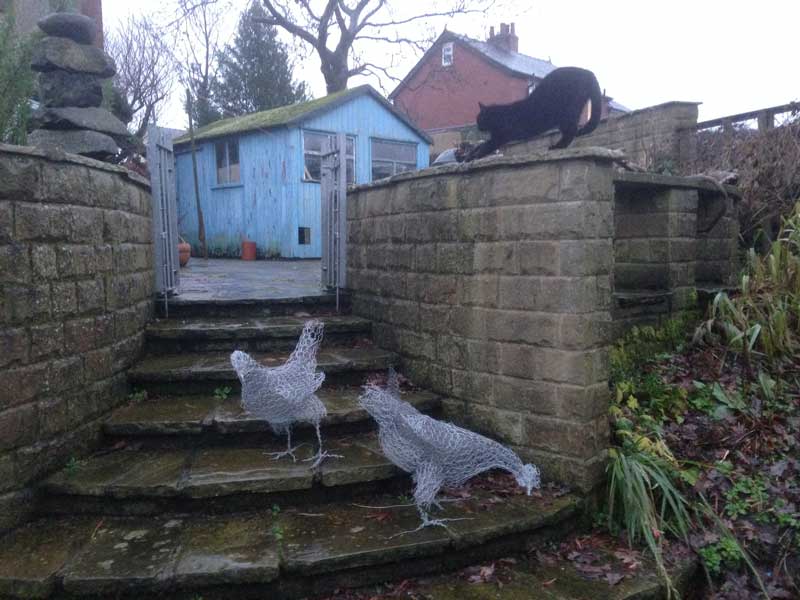 Fergus the cat upstaging the chickens

I just thought I would share a couple of photos from this morning, I went to Conder Green on the Lune Estuary. Such a beautiful day that even the mud looked nice – reflecting the blue sky. I love the shapes carved by the tidal channels in the salt marsh and mud, and the birds are always fascinating. Today there were lots of redshank scurrying around busily, feeding before the tide covered up the mud. I think they were redshank anyway, they had red legs.

I’m planning a series of larger paintings from my accumulated sketchbooks of the Lune Estuary, I have dozens of sketches of birds and the river, I’d like to do something with them. 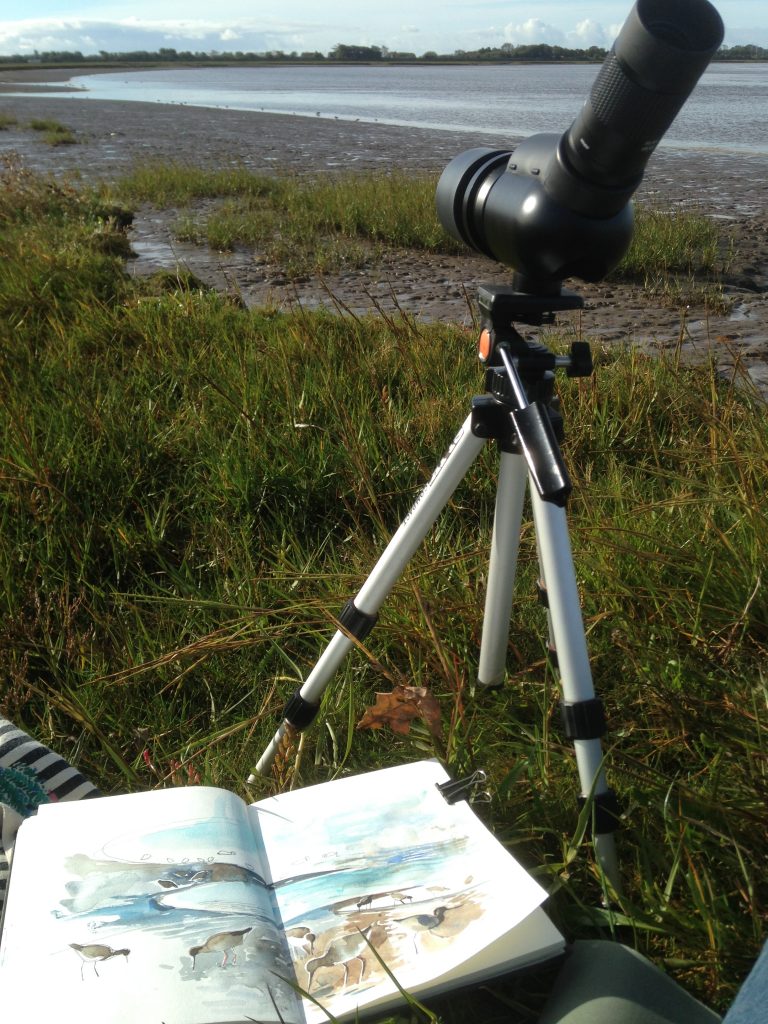 My Mighty Midget telescope and sketchbook 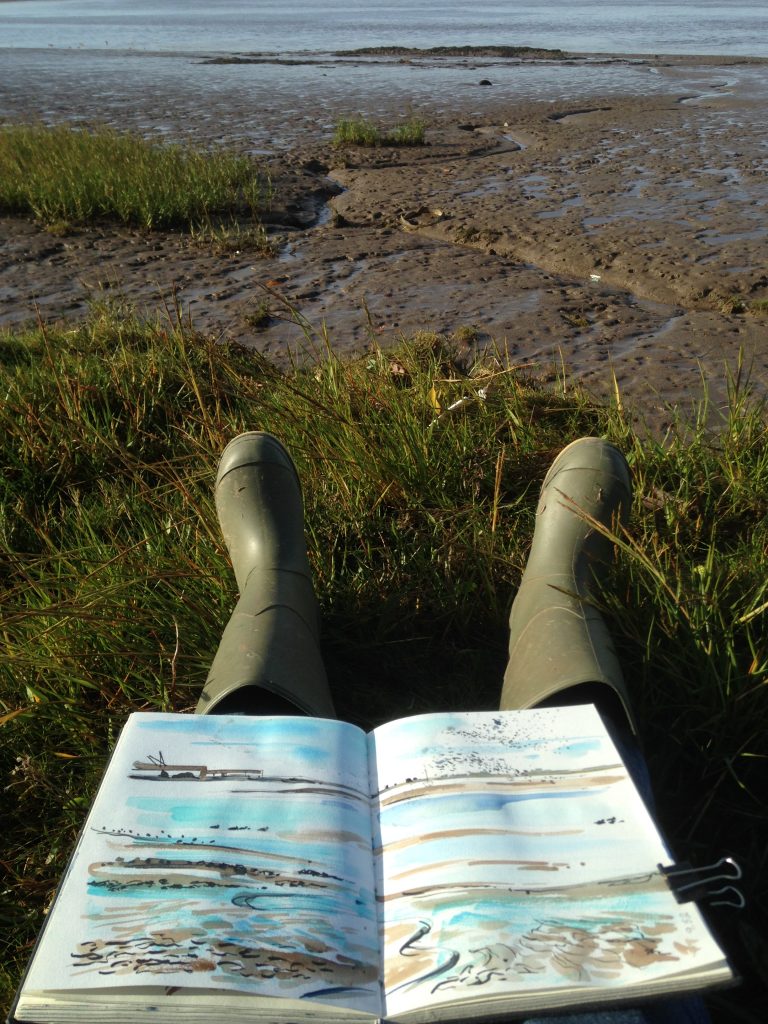 Wellies essential all year round in Lancashire 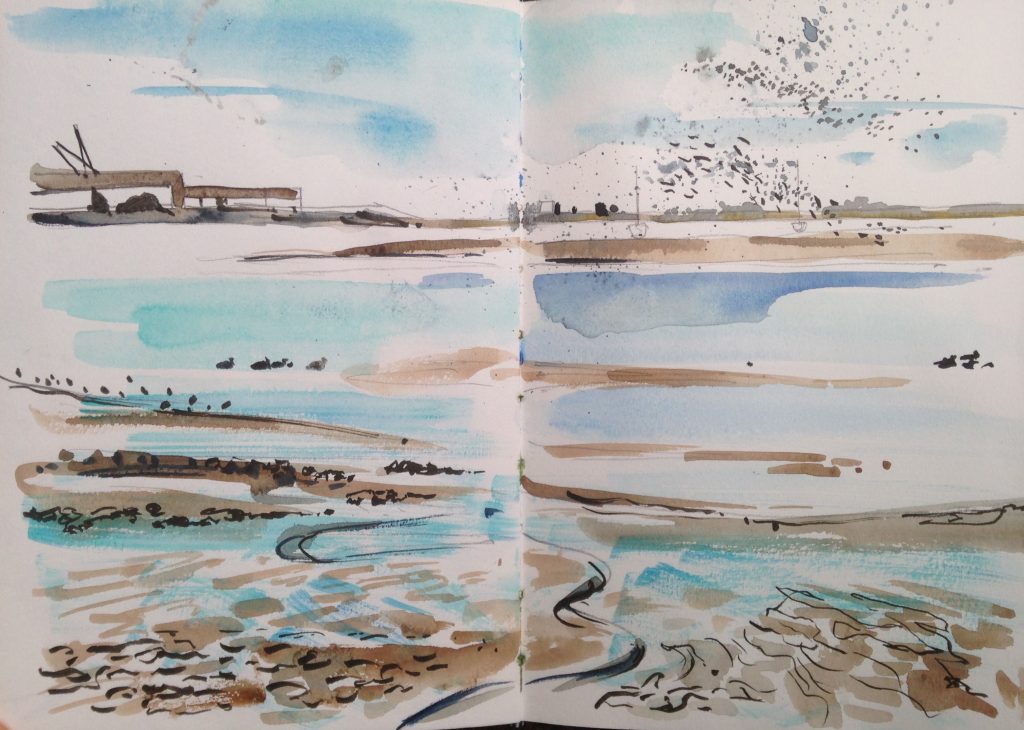 Conder Green. Glasson Dock in the background and a flock of oystercatcher and knot?) which rose from the opposite side of the river 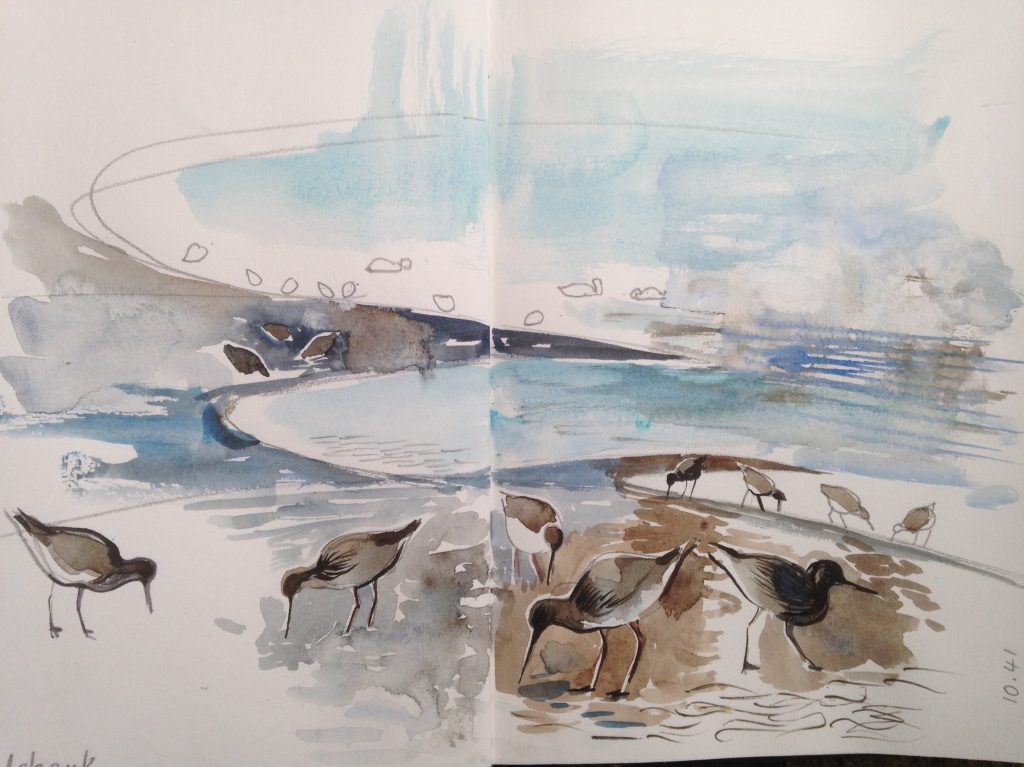 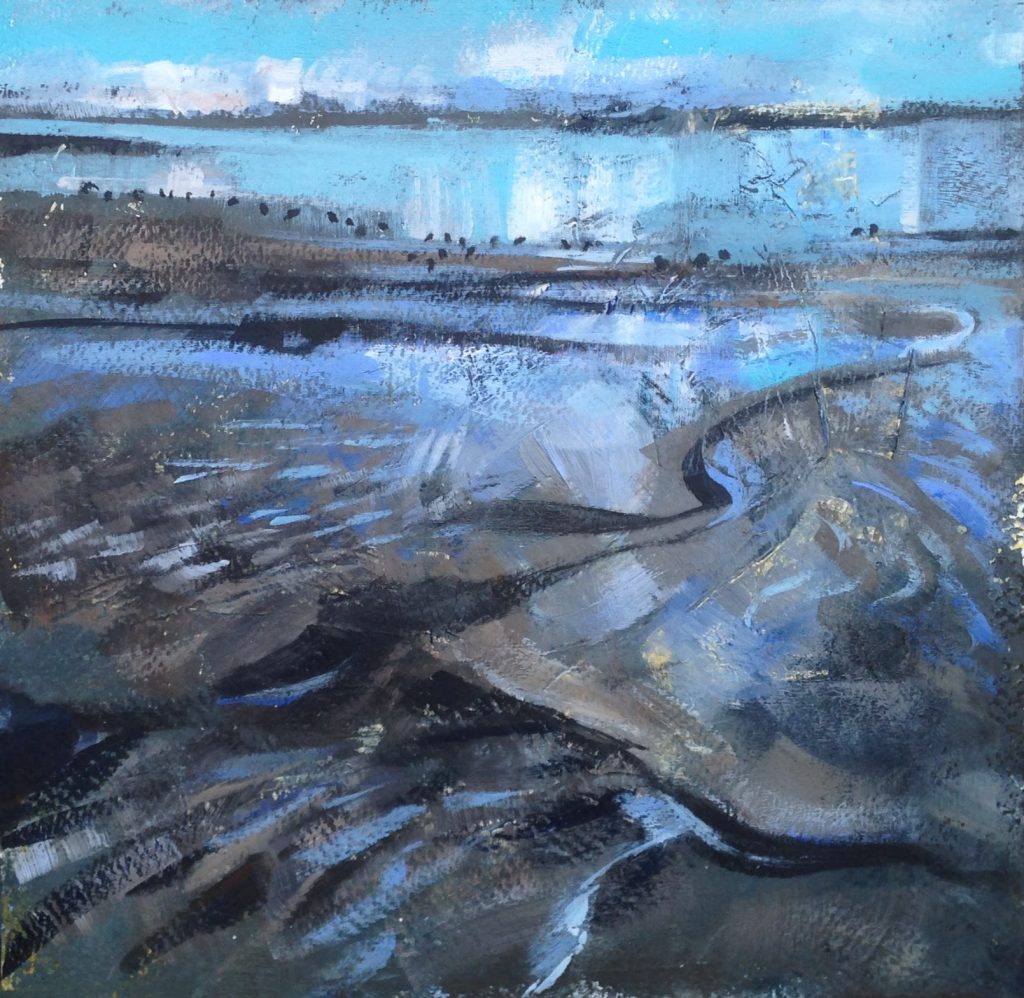 Blue Mud! An acrylic study I painted from my watercolour sketch.

May and June are my favourite time of year. These watercolours are of gowans, lovely big daisies, which fill up the edges of our garden at this time of year, roses, and just the general joy and chaos of spring. I painted the deer at Leighton Moss, a nearby RSPB reserve. I’d gone with a group to sketch for the day and we were rewarded with seeing so many amazing birds and animals, an otter, marsh harrier, gorgeous young fluffy moorhens, and these red deer mother and young, who stepped out of the woods in front of our hide, like a scene from Bambi. 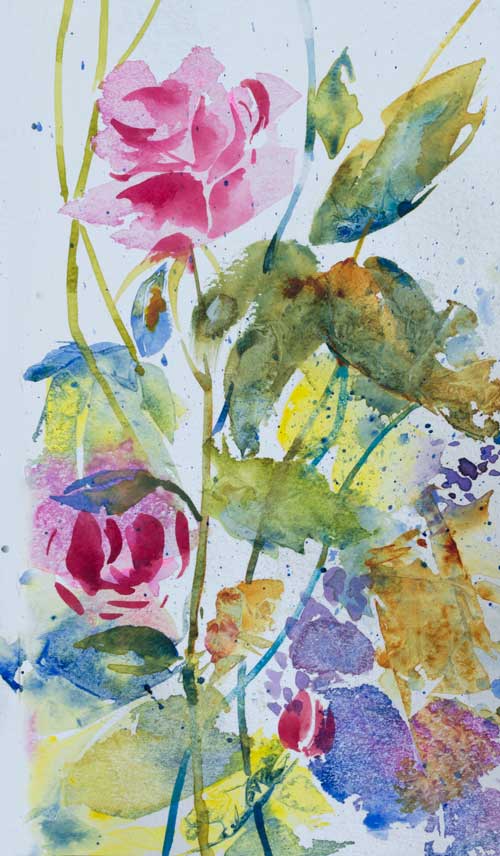 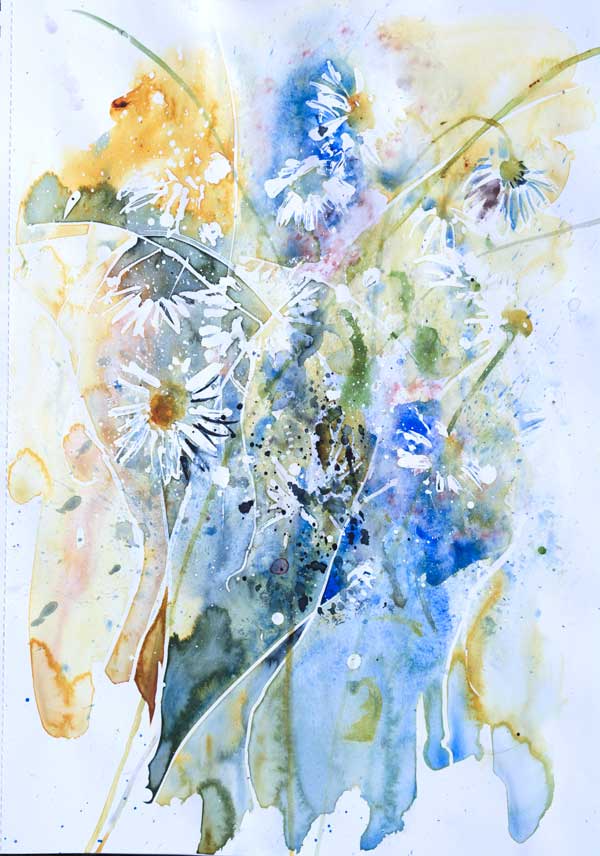 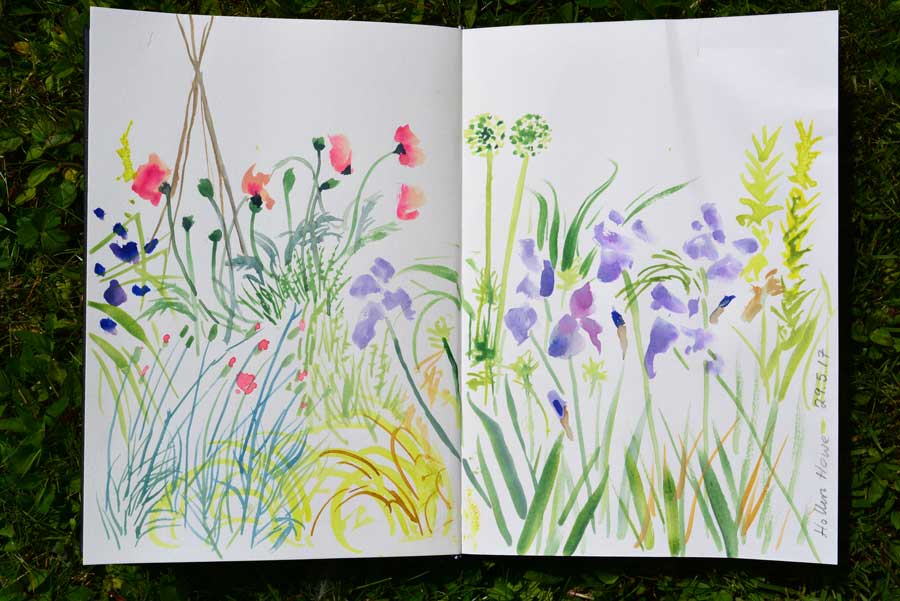 A sketch from a lovely garden in Eskdale, watercolour 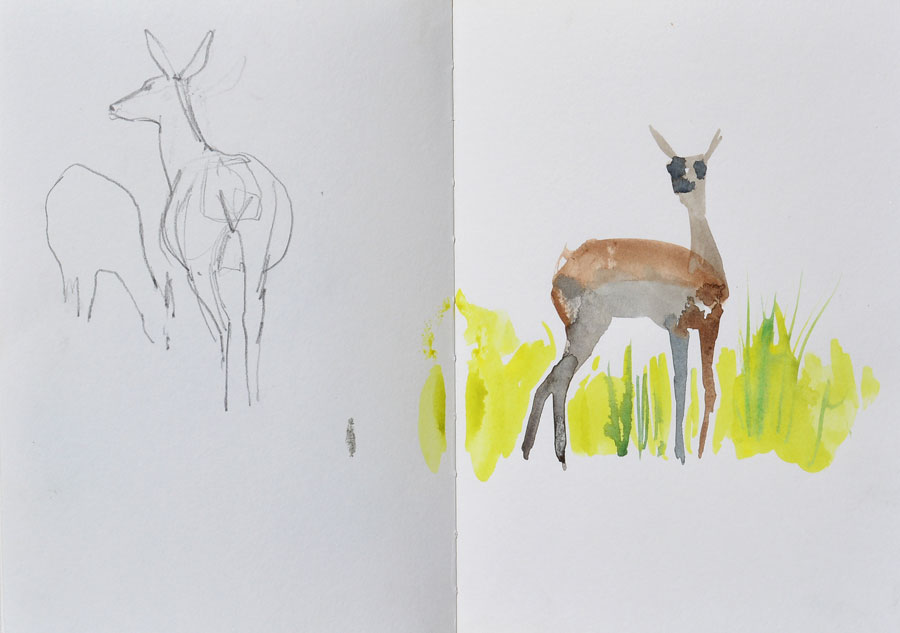 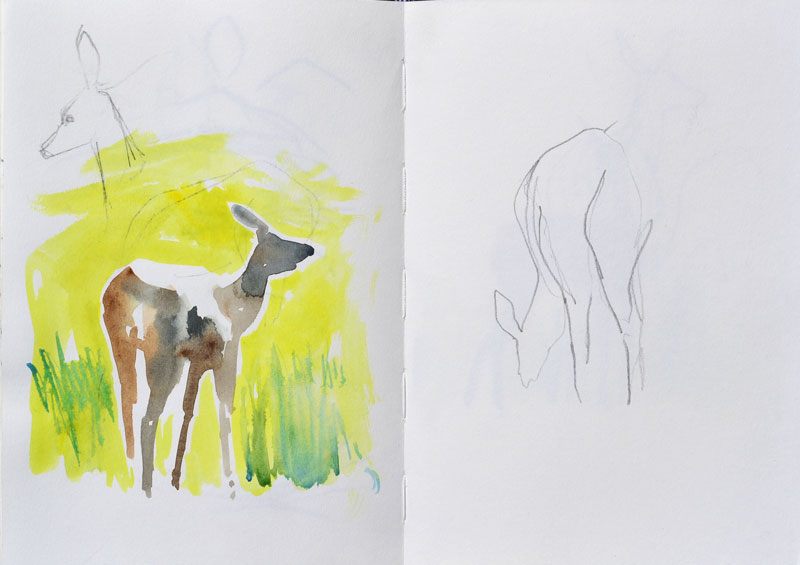 I’ve been working on a few different things recently, and painting the canal has been one I’ve really enjoyed – probably more so than painting the back door, which has been another project. The door was easier though.

These are mixed media paintings in watercolour and acrylic paint. I live very near the Lancaster canal and spend a lot of time both canoeing along it and walking my dog, sometimes also canoeing with the dog, (as he prefers to be in the boat). I love the tranquility of the canal, and aimed to capture its ethereal beauty in my paintings.

These are all paintings of my local stretch of the canal, between Garstang and Lancaster, including my favourite bit which is the arm to Glasson Dock. 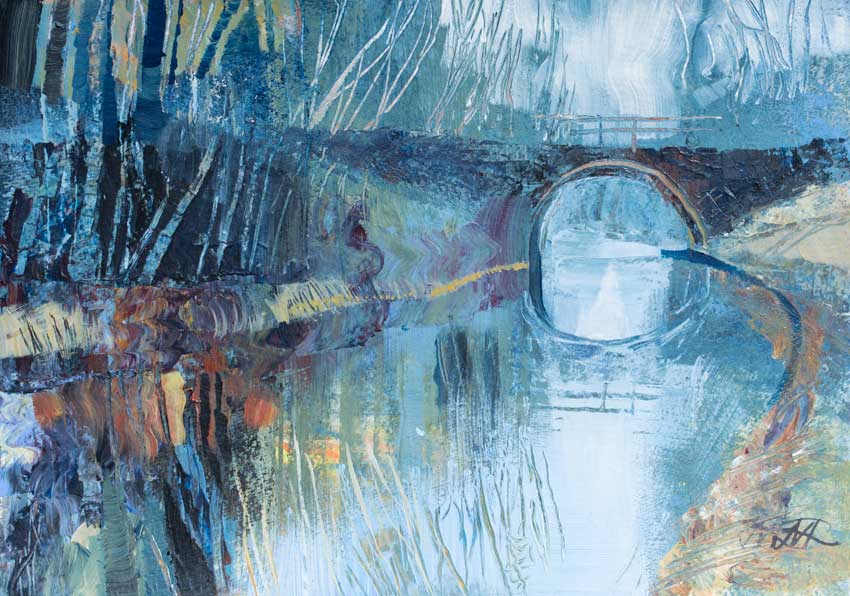 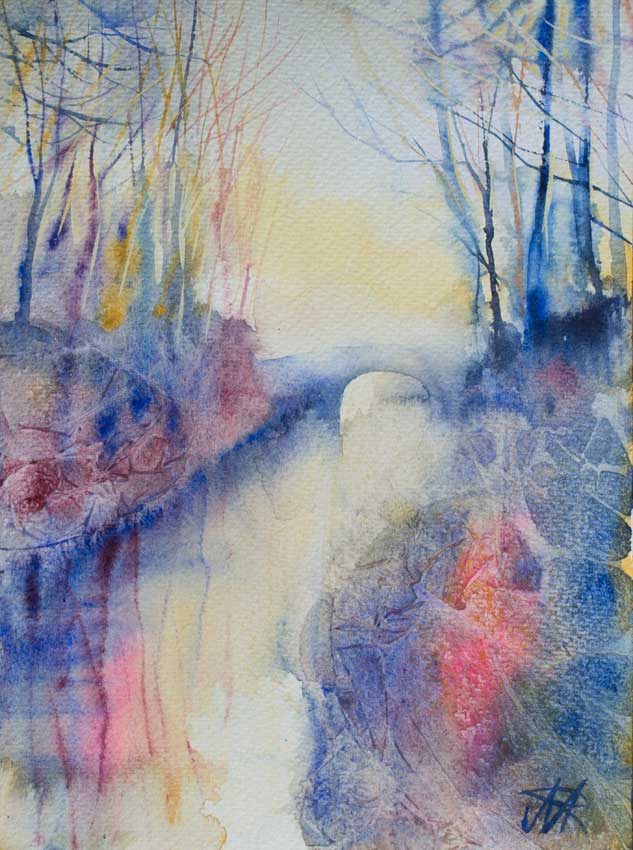 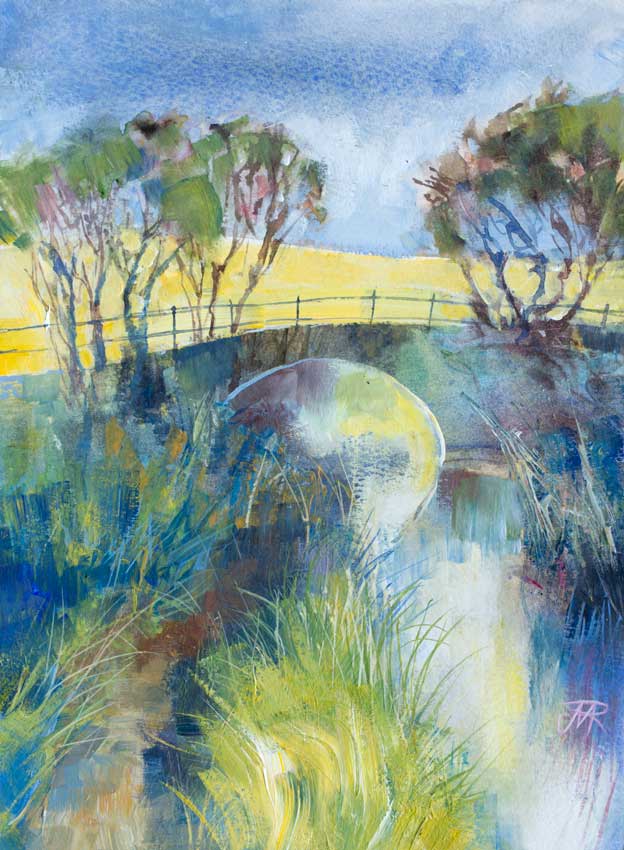 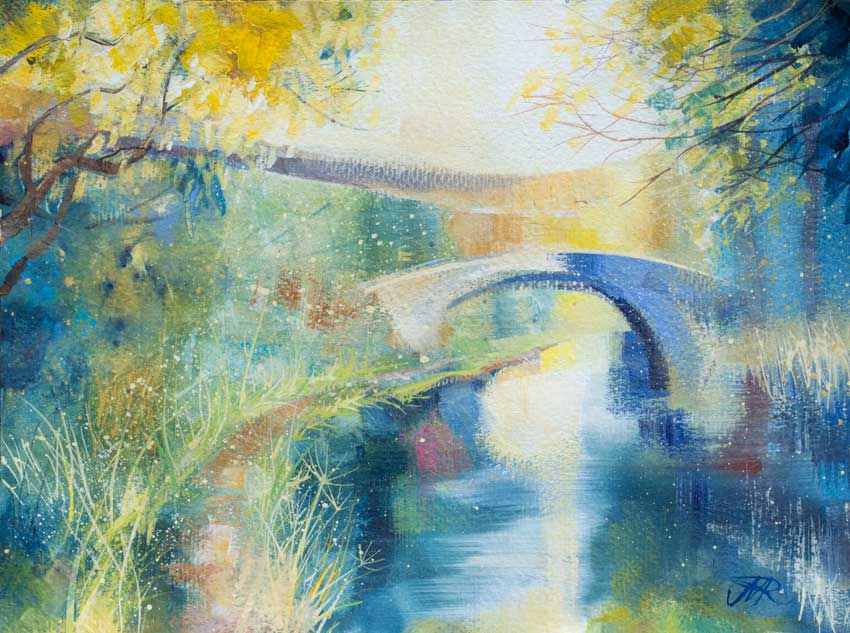 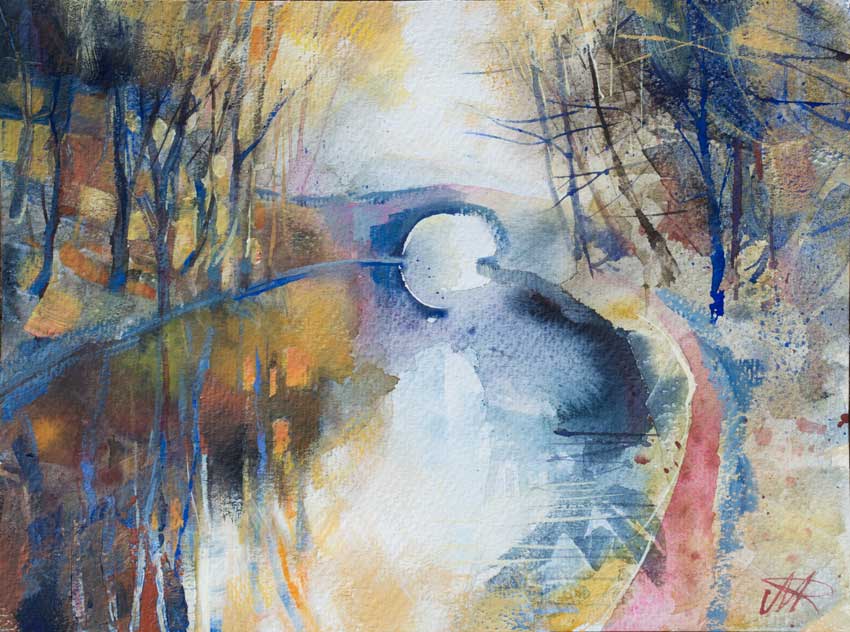 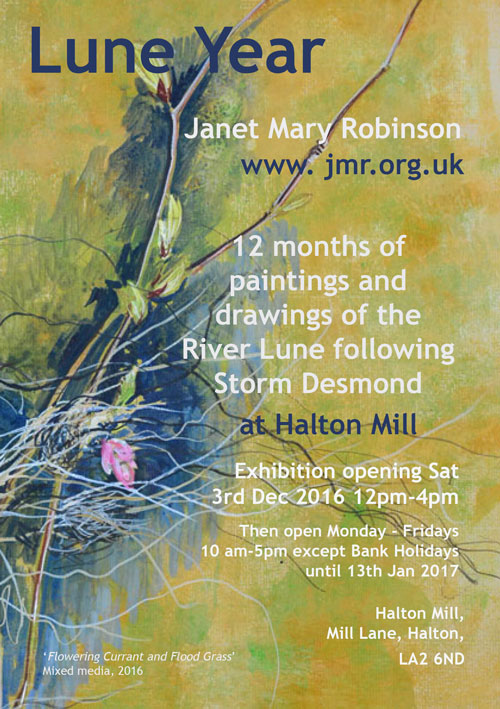 This oil painting is part of my series, Lune Year. I’m painting the river every month since the big floods last December. I’m planning to exhibit them as a series to coincide with the anniversary of the biggest flood, on December 5th. Which might be slightly tempting fate.

Come and visit our shared artists studio at Unit 2.9, Halton Mill.  The artists will be there between 10am and 4pm on Saturday and Sunday 23rd and 24th July. Original artwork, prints, and cards for sale. Browsers welcome. Halton Mill is located on a beautiful riverside setting with lovely walks. The cafe will be open serving teas, coffees, home baking and lunches. You can find directions to the mill here, scroll to the bottom of the homepage: http://www.haltonmill.org.uk/ 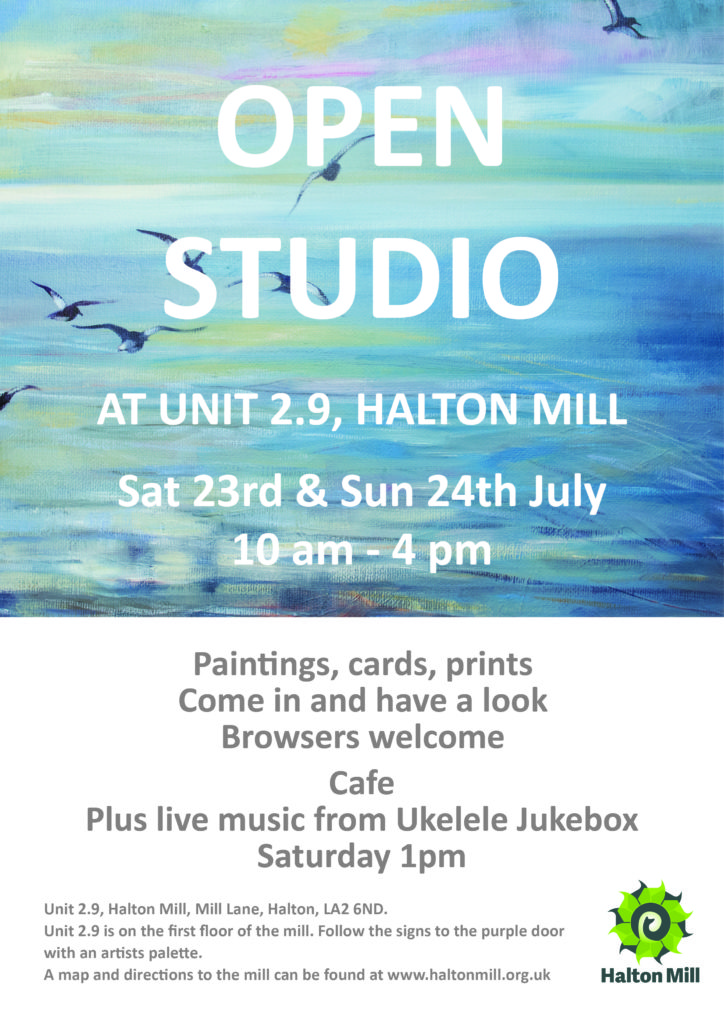 A short lived spell of warm sunny weather in the past few days has finally brought a touch of green to the trees. This sketch is of the brand new sycamore leaves opening, the grass from last December’s floods still wrapped tightly around the branches.

Its mixed media; acrylic and pastel, on a watercolour background. 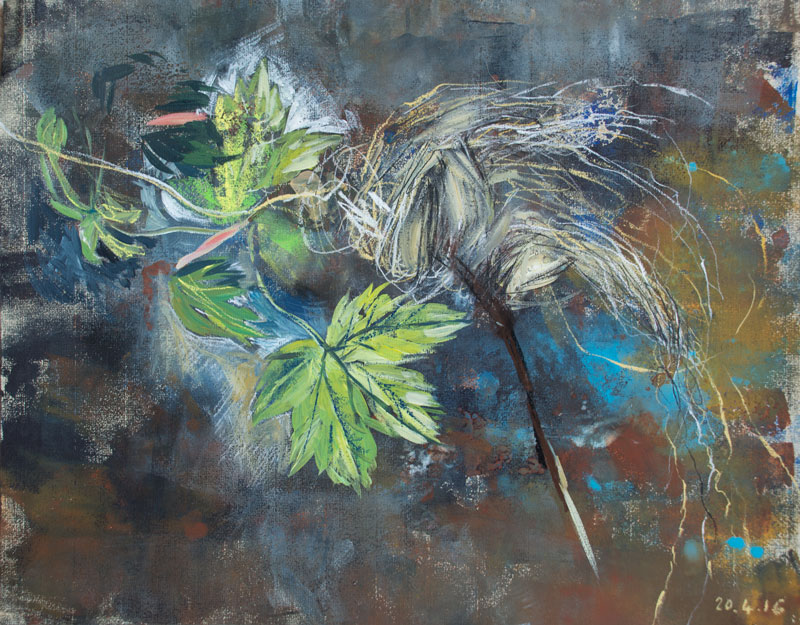 These drawings are of buddleia and flowering currant bushes growing alongside the River Lune in Halton, outside my studio. They are just beginning to bud, and I wanted to record the budding leaves and blossoms tangled in the ‘flood grass’, or warlords whiskers, as a friend calls it.

Without really planning it, I’ve embarked on a project I’ve called Lune Year. I am drawing and painting the river, and the riverside, for twelve months following the ‘big flood’ of December 5th, 2015. I’m fascinated by the way that the riverside has been so profoundly changed. From late November until mid January, give or take a few days, the river was in spate. On the night of 5th December, the river flooded to unprecedented levels. The environment agency recorded the flood on 5th/6th December as follows:
The River Gauge at Caton on the River Lune recorded the highest ever flow on an English river as 1742 cumecs (m3/second) – That’s 1742 tonnes of water flowing down the river every second! The flow peak was recorded at 00:15 on 6th December 2015 following the intense sustained rainfall from Storm Desmond.

The river throughout December and early January was pretty scary to be honest. However, it was also utterly fascinating. I spent a lot of time filming and photographing it, at different points within walking distance of my studio, and I began my series of paintings and drawings. I’m planning to exhibit them next spring, once the twelve months is up. In the meantime, I’ll post some of the work on my blog.