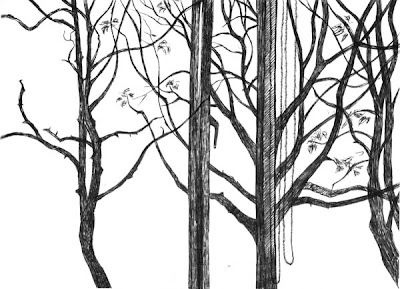 Its exam season and I’m doing some invigilating at Lancaster University. The other day I forgot to bring anything to read, but I had a black biro pen, so I drew the trees next to the fairly uninspiring building site out the window. It entertained me for a surprisingly long time, although I think I frightened the student just in front of the window. I was considering drawing the students but it would have been too obvious. I’m fairly pleased with how the drawing turned out. It sort of reflects the bleak atmosphere of an exam room, and my feeling which I’ve always had, whether sitting exams or supervising them, that what’s outside the window is always of greater interest.
Maybe would have been better if I’d included the window frames – works better when seen ‘framed’ in the sketchbook.

I’ve had loads of really great bird encounters lately but unfortunately have not drawn any of them.
On the 1st of April I was walking by the River Wenning, just west of Hornby, where it meets the River Lune, and saw clouds of acrobatic swallow like birds, which confused me, as it was still freezing cold, and too early in the year for swallows. It turns out that they were sand martins, which return from their migration earlier than swallows and house martins. There are sand martins living all along this stretch of river, and this afternoon I spent five minutes watching them darting over the water catching insects, and popping in and out of the holes they nest in, on the opposite bank. They’re lovely little birds and were zooming right past me.

On the 11th of April I saw a Marsh Harrier in the RSPB reserve Leighton Moss, which is about 15 miles north of here in the beautiful South Lakes. Marsh Harriers are quite rare, as they live in reed beds, which are nationally very scarce. They are a bit smaller than buzzards, and a totally different shape. Have a look at http://www.rspb.org.uk/wildlife/birdguide/name/m/marshharrier/index.aspx. It was circling round and round just above the reeds, hunting, occasionally diving down out of site. He (I think) was getting frequently harried by buzzards and crows, guess they don’t get on too well.
There was also a couple of Great Crested Grebes, nesting just in front of the hide. Also really beautiful birds.

Finally, well, for this entry, we have a nestful of baby house martins, conveniently residing just above my study window. The babies screech and cheep every few minutes when they get fed.