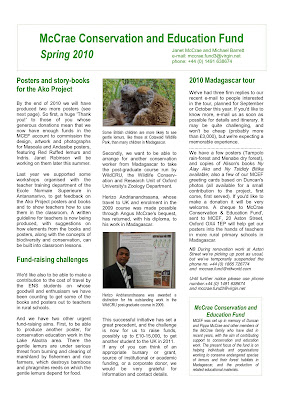 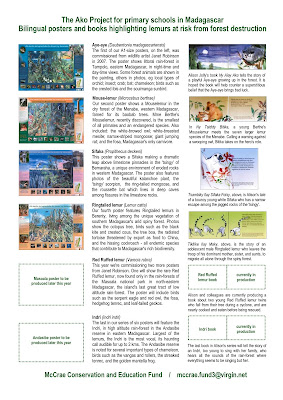 I’d like to share this update of the Ako Project, an environmental education initiative in Madagascar. I’ve been working on commissions for the Ako Project since 2007 and the second page shows the four posters I have created thus far. They’re being distributed to primary schools around the country.
I have a deep fascination for the island of Madagascar – it’s biodiversity is astonishing and utterly unique (over 80% of species on the island are endemic). It’s the only place in the world where new primate species are regularly discovered, and amongst the 99 extant species is the world’s smallest primate – the 30g Madame Berthe’s Mouse Lemur. Until as recently as the 1700’s (the date of extinction is disputed) there were also giant lemurs (240 kg), larger than gorillas. These were almost certainly driven to extinction by humans, along with the endemic pygmy hippos, giant tortoises, and the worlds largest birds http://en.wikipedia.org/wiki/Aepyornis, which were over 3 metres tall and weighed 400 kg. The flora is equally amazing – with as many as 12,000 plant species – although many of the species, particularly in remote forested areas, have not yet been scientifically named. In Madagascar there are 6 species of baobab trees; only one is found elsewhere in Africa.

Sadly, Madagascar’s biodiversity is under extreme threat. Over 95% of the forest cover has already been destroyed, and the situation is worsening. The Malagasy people are amongst the poorest in the world. The majority of the population live in rural areas and survive by subsistence farming, relying upon dwindling forest resources for charcoal, and for tavy, (slash and burn agriculture). Slow growing primary forest does not have a chance to recover, and when you fly over Madagascar what you see are endless bare mountains with giant red gashes where the soil is being washed away. Such land is no longer any good for agriculture. Life is incredibly difficult for most Malagasy. Access to a good education is almost impossible in most areas of the country, and as such there are almost no possible escape routes from poverty. People are forced to continue living in an unsustainable manner because they truly have no alternative.

Madagascar’s nature reserves are also under extreme theat from illegal logging. Following a coup in February 2009 which saw the president of Madagascar replaced at gunpoint by the mayor of the capital city (a former DJ), most international aid agencies withdrew their support from the country and the nature reserves lost their protection. Gangs of armed bands, financed by foreign timber traders, went into the nature reserves and plundered the valuable hardwood such as ebonies and rosewood. A commercial bushmeat market has sprung up over the last year and a half. The tourism industry all but collapsed in 2009, with huge loss of revenue.

Sometimes it is difficult to feel any hope in the face of such difficulties, however, there are so many amazing organisations and individuals working to improve the situation.
If you want to help Madagascar, consider supporting:

In addition, consider taking a holiday in Madagascar. You will have a truly amazing experience, and you’ll be bringing much needed income to the local people. Visit the national parks and private reserves. Eco tourism needs to be more valuable than illegal logging.
It’s such a great country. The people are really friendly, (they quite literally will answer yes to everthing, simply to please you) and the whole country is, how to put it, hilarious. It’s the only place I’ve ever been where travelling on top of a fridge freezer on the back of a pick up truck, with seven other people, is a normal state of affairs. In the south east of the country dug out canoe is actually the most efficient means of transport, despite the abundance of crocodiles.

I highly recommend a visit : )