A watercolour sketch painted sitting on the rivers edge at Marsh Point, finished at 6 pm. The mud was a beautiful almost silvery blue colour reflecting the sky. A large flock of common gulls, feeding, preening, floating – those kept spinning around due to the very strong west wind. The odd herring gull came to join them and just as I was finishing drawing a crow marched past looking as if it were on a mission. The gulls turned to watch the crow and sort of edged away from it, didn’t seem to like it. Black headed gulls were feeding nearby on the mud, and peeweets (lapwing) were wheeling around and occasionally diving down into the channel next to me. A large group of shelduck were dabbling or plowtering or whatever ducks do, further downstream, and a couple of small waders – I think turnstones – were busily scurrying around. No herons, for once, which is unusual. Mid and low tide is definitely best for birds, and later in the day. Early morning is probably also very good but I don’t think I’ll be finding this out any time soon. 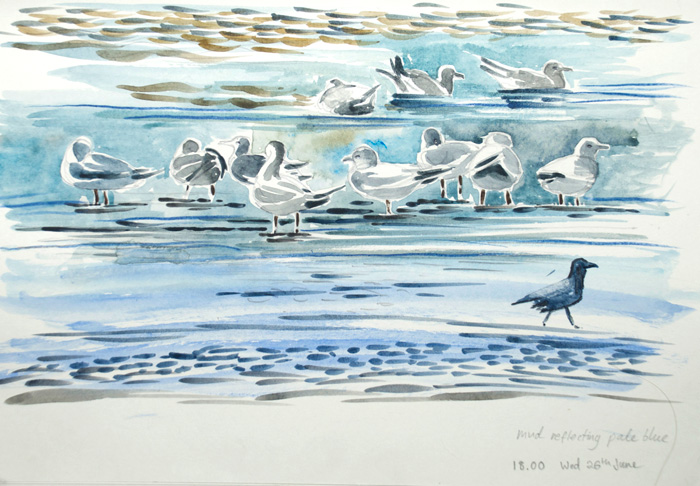