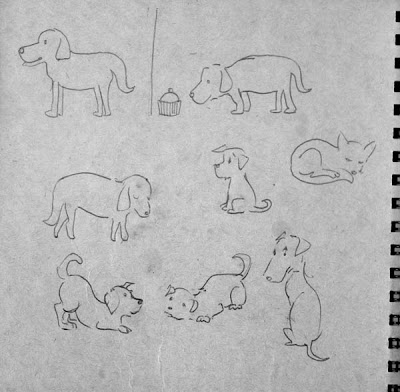 There’s nothing more fun to draw than little cartoon dogs. Anyone who loves dogs should try it. Dog’s expressions are just so great.

Ashby has been stealing food lately, (he appears to be in a Naughty phase at the moment). The look on his face when he’s caught trying to cram in an entire lemon cake is priceless – as is the happy look after a successful cake scrat (for some idea of it, see Top left dog).

On a separate note, it sometimes bothers me that, for an artist, I struggle to say anything meaningful about my own art. (For example: They’re just little, cartoon dogs. On cardboard.) But I’ve been sorting through artists statements at work recently, and realised that artists divide into two kinds, the kind who are good at writing pretentious bollocks talk, and the kind who aren’t. And the artists who are good at the silly statements don’t sell any more art. This made me feel better. Mwuh huhu.
Now I’m going to work on my bollocks talk.