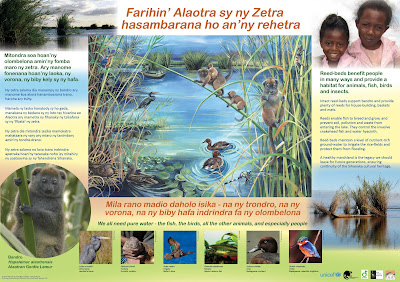 This latest poster in the Ako series will hopefully be going to press shortly…that is assuming another species hasn’t gone extinct in the meantime and needs to be edited out. As I mentioned in a previous blog post, the finished illustration of the habitat and wildlife of Lake Alaotra shows two Madagascar pochards where originally there was going to be an Alaotran grebe. The grebe was declared officially extinct early in the summer, whereas the pochard is ‘merely’ critically endangered (through habitat loss). On the other hand, Durrell’s Vontsira, the animal that looks a bit like an otter, or as Durrell Wildlife Conservation Trust describe it; ‘a scruffy ferret’ was first seen only in 2004 and scientifically named in 2010 – the first new species of meat eating mammal discovered in 24 years. It will be interesting to see how long this species survives.