I’ve fallen behind with my month of daily river drawings. I went out last Thursday and sketched these gulls in watercolour, then cycled home and sort of staggered into bed. I find that being ill and creative are somewhat incompatible. Even if I want to draw or paint, if I’m ill it just doesn’t work. Anyway, I don’t think these are too bad. I think my month of drawing at the river has definitely improved my understanding of how birds are put together, and although I still find gulls in particular very difficult, its getting easier. I particularly like that I managed to capture the evil expression of the bird on the bottom left. Its maybe how I was feeling.

I was at the Lune a couple of times over the weekend but instead of drawing it I swam in it. Its important to really get to know your subject, to get involved. So todays drawing is the latest, and for the time being, the last in the series. Yet more gulls. I was getting on OK until a thunderstorm piled in and rained me off. You can see the raindrops on the paint. I need to get a waterproof sketchbook.

Goodbye to the Lune for a while. Tomorrow I head north. I’m going to Iceland, to wild camp and then stay with friends from the far north west in Ísafjörður – the Ice Fjord. In fact only one of our friends will be there. Sarah, a writer and filmmaker is currently traipsing her way around the backwoods of England, having won the Penguin Wayfarer competition. You can follow her beautifully written blog here http://www.ajourneyonfoot.com/. If you spy very hard I can be seen and indeed heard in her blog, having met her by chance on a bridge over the Lune. Serendipity.

The film she made which won the competition can be seen here, featuring the Westfjords in Iceland:  http://www.ajourneyonfoot.com/entries/ 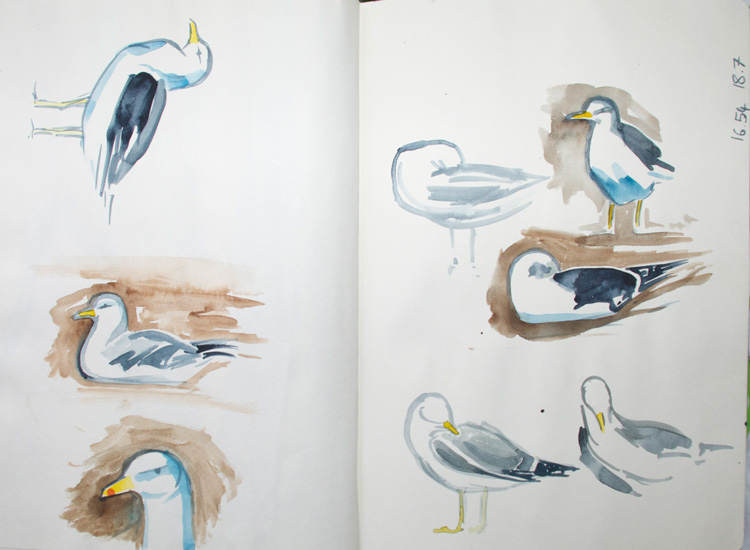 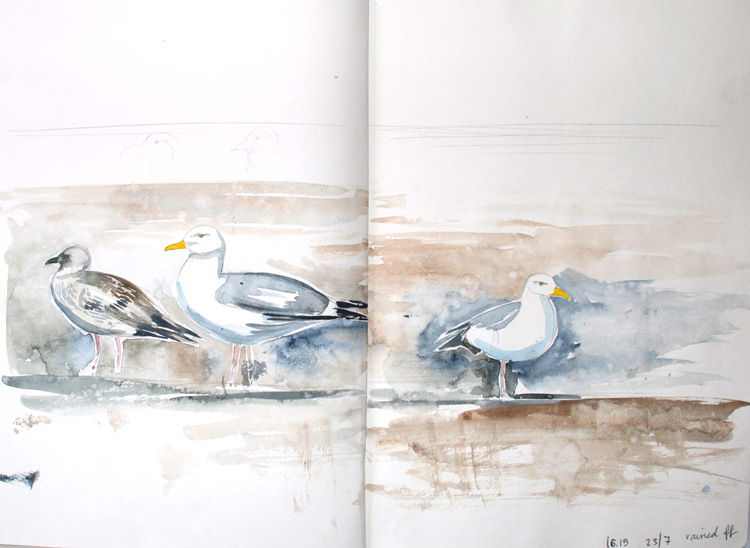