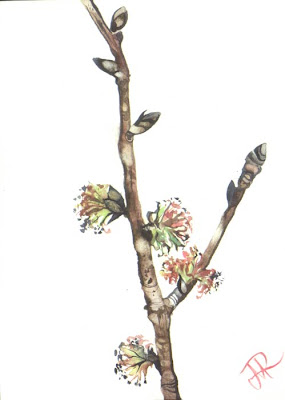 This watercolour sketch is of an elm twig, with its flowers. Elms flower before the leaves come out. This particular tree is a lovely large one, in a nearby field. I’d passed it several times but never before realised it was an elm – my parents were visiting and Dad identified it. I was recently reading about elms in Robert Macfarlane’s lovely book ‘The Wild Places’. He writes of how until relatively recently, elms used to be a really distinctive feature of the English countryside, as can be seen from old landscape paintings. John Constable painted many landscapes with elm trees. Elms were planted to mark waypoints, and lived to be hundreds of years old. This link shows a painting Constable made of an elm’s trunk: http://tinyurl.com/y3hrczy.

Sadly, Dutch elm disease has decimated elm trees, and often the only ones left surviving are small ones, inside hedges. The beetles that bear the fungi causing the disease apparently target larger trees. Dutch elm disease arrived on the south coast of England in the late 1960’s, in a shipment of logs from the US; and within ten years about 30 million died. Large elms are really scarce now. I think I will draw the Galgate elm tree later in the summer, when it is in leaf.