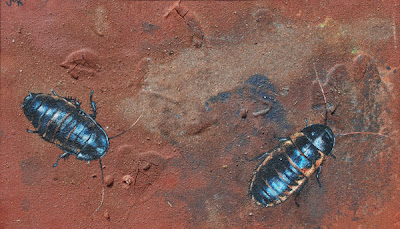 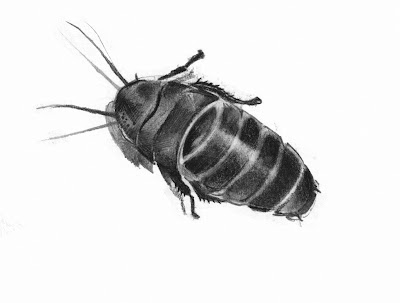 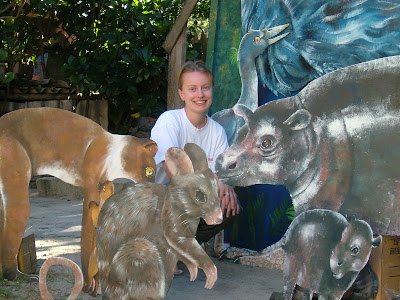 Just been told my painting ‘Rocky & Ruth, Madagascar Hissing Cockroaches’ has been accepted for Open Up North, an exhibition at the Brewery Arts Centre in Kendal.
This painting has come a long way.

In 2006 I spent just over 3 months in Madagascar, volunteering on various arty projects for NGO Azafady, and the Botanical Gardens in the capital city, Antananarivo. My biggest project involved creating and painting models of large scale extinct species, a kind of diorama, for kids. My studio was a little school house next to the Azafady headquarters in Fort Dauphin. I made friends with some of the staff, especially Lala, an amazing conservationist and wildlife expert. Lala was an invaluable source of information. For example, he could identify Bad scorpions and Good ones (mocking me for panicking after discovering the latter on my pillow). He waded through swamps with me looking for bull frogs, explained afterwards why it was a particularly bad idea to go for a wee in the rainforest (leaping heat seeking leeches), took me and a couple of friends out on a pirogue looking for crocodiles, in vain, until we got out and saw a large one that had been lurking underneath our leaky vessel…

Anyway, it was Lala who after hearing me complain that I missed my cat, presented me with two giant hissing cockroaches in a shoebox. I kept Ruth and Rocky, fed them banana, and sketched them. They didn’t really offer much in the way of cuteness value, but Rocky at least made hissing noises if you touched him. Unfortunately, he escaped after only a week and I realised that actually, I only like giant cockroaches if I know exactly where they are. Rocky turned up eventually, clinging to the underside of the chair in my room. Having decided enough was enough, I tried to remove him, but didn’t realise just how strong a cockroach can be… it really took some effort to prise him off. I’m fairly ashamed to say I then lobbed him in the bushes.

When I left Fort Dauphin, I smuggled out the old bit of hardboard I’d been using as a palette. Obtaining the paint for use in my various projects had been a bit of an ordeal. I had some colours flown out with gap year volunteers, but the rest was Malagasy, hand mixed out of noxious substances up a dodgy looking alleyway in Tana. Having little Malagasy or French, I struggled to explain precise colour preferences, and seemed to end up with an awful lot of brown. Over the weeks, my palette became quite interesting, with crazed blobs of colour. The day before I left I painted one last coat of my ‘favourite’ homemade brown paint, and chucked a handful of sandy soil onto it. By this point it almost certainly constituted a bio hazard. However, it arrived home safely, and I then painted a portrait of Rocky and Ruth onto it, so that I can remember my ‘little’ pet cockroaches forever.

Rocky and Ruth will be on display at the Open Up North exhibition venues from Sat 1st Oct- Mon 10th Nov.

3 thoughts on “Cockroaches in Kendal”