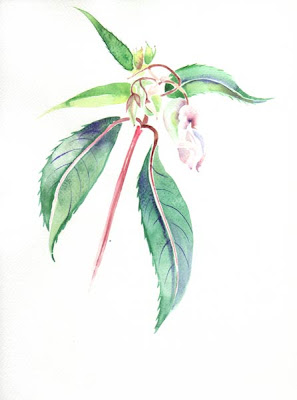 End of the summer, and water margins all* over Europe are covered in a jungley mass of pink and white bloom; the ‘Invasive Alien’ is in flower. Impatiens glandulifera, or Himalayan balsam, is a much maligned plant that was introduced from Asia about 100 years ago, as a garden ornament, possibly to provide shelter for gnomes. It really liked Europe, and has now spread almost everywhere, usually along riverbanks.

I think Himalayan Balsam is the closest thing we have to a Triffid. It’s so in your face, it grows in dense massive patches and easily reaches two metres tall or more, it has a weird pungent smell, giant weird knobby roots, and an awesomely effective reproductive technique – you just kick it or send your dog in, and the seed pods explode open, pinging seeds for a good few metres – enough to cross your average smallish river or road. I know, because whilst doing my Msc I was charged with the task of surveying and mapping it in the area around Lancaster Unversity. It’s spread a lot since then.

If you research the species at all, you get lots of terms appearing like ‘invasive, swamp, threaten, out-compete, out of control, rampant, non-native, stealing our jobs, eating our children…OK, maybe not the last two, yet, although unlike humans, it is evolving fast. It’s reassuring to know that xenophobia is alive and well in the world of ecology.

It is true that Himalayan Balsam is incredibly successful, ecologically speaking – it dominates and is able to rapidly expand its range. But none of the reports I’ve read mentioned the fact that bees absolutely love it, and at a time of year when there are few other flowering wild plants, it is a haven for insects of all kinds. I also seriously doubt whether it has caused any extinctions. I suspect it’s main crime is being a successful Asian.

If I ever exhibit with the RHS again, I will be showing a series of portraits of Aliens.

* Maybe not all, yet, for instance, I don’t know if it’s reached Iceland yet. I still got some kicking to do.