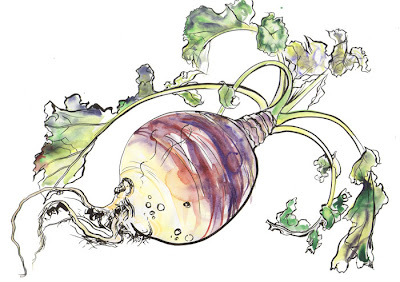 To celebrate Burns Day here’s a sketch of a turnip, which in Scotland is called a neep. (As in haggis, neeps, and tatties). Said massive turnip was grown by my Dad, who’s really quite keen on giant veg. I still remember the humiliation of me and my sister being photographed for the local paper 20 years ago or so alongside one of Dads prizewinning giant cabbages. Later when I was at college in Dundee our ceramics teacher asked us to bring in some vegetables to use as sculpture models, but my carrots were dismissed as being too scary due to their post-apocalyptic appearance.