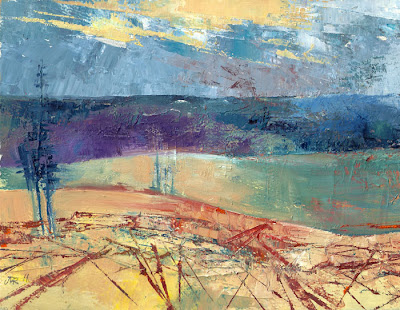 Firstly, a very Happy New Year!
This promises to be an exciting one, certainly if doom everywhich way you turn adds that much needed spice to your life. But regardless of what else happens in 2012 and beyond, painters will continue to paint. Painting is a pathological disorder, and as a lifelong ‘sufferer’, I find myself particularly drawn to, (or rather drawing), beauty in the outwardly most damaged of places. Such as this oil sketch of the clear felled hills on the road to Moffat, in the Scottish Borders. We often take the A701 on our way to or from ‘home’ in Fife, because it is nicer than the motorway, there is good food to be had*, and most importantly of all there are bleak hills, bog, mist, windmills and forestry plantations… A landscape painters paradise!

Conifer plantations are not native in Scotland. They were mainly planted between the 1950’s and 1990’s, for softwood timber production. Little light penetrates to the forest floor and they support very few other species. When the trees mature they are usually clear felled. I’m interested in painting such landscapes because they are so striking and yet so overlooked, empty, devoid of animal life and human interest. It’s a landscape which is so obviously ugly, scarred and damaged and yet really quite beautiful. If this isn’t enough of an excuse, I also think forestry plantations in Scotland, or at least the practice of clear felling, will die out sooner or later, as it is becoming uneconomical in the face of competition.

*At the Buccleuch Arms Hotel